AM I DEAD OR JUST EMBARRASSED?

Or both? An article in the newspaper about the new 'wonder drug'
Alli had a quote by a medical Dr about obesity. "It's also embarrassing
to be 0bese, it's embarrassing to be dead."

Okay, now I'm laying in my coffin, and I'm embarrassed to be there...
why would that be?
Unless I did something really stupid like try to have sex
with a 220V electrical outlet(or Elsie the cow) and ended up electrocuting myself
(in which I guess my ghost might be embarrassed) I'd think that being dead
is just the way we all end up sooner or later...so what's embarrassing
about that?

I would think that the Dr would be embarrassed to say something as
stupid as that...

Found this the other day while looking though some old photos; yup, 30 years ago I was a pirate! At least for Halloween...Yargh - matey!

And I was skinny too! 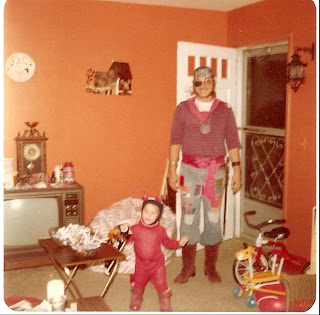 What we have here may possibly be the first beer
that I ever tried. Of course, there's no real evidence
I can cite, but it's quite possible. During the years 1959-
1961 we lived in the Phillippines, and my Dad was always
one to let me have a sip of alcoholic beverages upon
occasion. I know he used to drink this brand (though
he was never much of a beer drinker), in fact, one
of his co-workers used to send us a case every Xmas for
years after we left there. So I'm going to go down on the
official record as San Miguel being my first beer.
Besides, they're my memories, and I can remember them however
I wish to...
Posted by tim 8>)... at 3:54 PM No comments:

Driving to work today...
Saw a truck with one of those 'motto' windshields that seem
to be the big rage these days.

Well maybe he is and maybe he's not, but I'm sure His
grammar is better than that!

And while we're on the subject, what about those WWJD bumper stickers?
Not sure, but I'm pretty sure if Jesus was around today, He wouldn't be
driving around in a big old SUV or truck with a sticker that said:

WHAT WOULD I DO

I'm pretty sure about that... 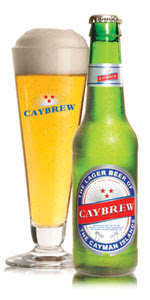 Well, back from vacation, and a great time was had by all..well at least me-all!!
As you can see, another new beer discovery from Grand Cayman; apparently a beer
that just went into production in Grand Cayman itself in March of this year. Not a
bad beer either, nothing really special, but a nice thirst quenching beer. Hope they
manage to stay in business, the beer was actually the high point of the visit to GC;
the turtle farm was re-done, and not near as interesting as it was when we went
8 years ago. The shops downtown used to be quaint little tourist oriented shops, but now
'Cruise Line Chain Stores' selling gold,silver, etc, that they seem to have at every port now.
So three cheers to Caybrew, the best part of Grand Cayman...
Posted by tim 8>)... at 11:39 AM No comments:

Yep, that time of year again; cruisin' in the Caribbean. Carnival 'Legend' this
time, leaving out of Tampa. And where are we going, you ask? I know
you did, don't deny it...
Grand Cayman...Rum Cake...
Cozumel...Mexican Beer...
Costa Maya...Mexican Beer...
Belize...Belikin Beer...

1) L.A.Dead by Stuart Woods: Stone Barrington(!) the ex-cop turned lawyer investigates
the murder of a movie star...who just happens to have married his ex-girlfriend!

3) All The Rage by Ian 'Mac' Maclagan: Ex-Small Face & Face tells his version of
life as he lived it. Interesting stuff, one of the bettter autobios I've read.

4) Year's Best Horror Stories XX ed.by Karl Edward Wagner: Is it just me, or do
horror stories (as opposed to novels) just not scary anymore? A few good ones
in here, but nothing that made me look for more by the same author.

5) Jonathan Strange & Mr Norrell by Susanna Clarke: Well, this was different, a large
sprawling covering the period 1807-1817 in England. But not quite the real England
as the 2 protagonists bring Magic back to England and get involved in historical
events such as the war against Napoleon. Very odd, but if you like large sprawling
novels, then this one may be for you.

6) Native Tongue by Carl Hiaasen: Another zany romp through South Florida containing
blue-tongued voles, theme parks, phone sex, burglars, land developers, the Mafia,
and a sex-crazed dolphin!!!! This gut just gets funnier every time I read him...
Posted by tim 8>)... at 12:38 PM No comments:

ANOTHER VICTORY FOR COMMON-SENSE

Court Calls FCC Indecency Regulation 'Arbitrary and Capricious'
This week, the 2nd Circuit U.S. Court of Appeals called out the FCC for their ever-morphing indecency standards. For the past few years, the FCC has flip-flopped on whether broadcasting accidental profanities on TV and radio should be deemed indecent. Historically, fleeting expletives had not been subject to federal fines, but in 2003 the FCC changed its mind, reversing their earlier decision on Bono's comments during a live awards ceremony, and sending broadcasters into a state of utter confusion. Fox took the FCC to Federal Appeals Court back in January, and thankfully, 2 out of 3 judges view the FCC's inconsistent indecency rules in danger of violating the First Amendment. The FCC can either reconsider its rulings on Bono, Cher, and Nicole Richie, or they can appeal the 2nd Circuit's decision to the Supreme Court. If the FCC opts for taking it to the Supremes, this case will shed a lot of light on whether the highest court in our country is populated by reasonable individuals committed to protecting the constitution, or politically-influenced pawns.

Nolan Bushnell, the inventor of PONG; the first mass-produced video
game (which I used to own - wish I still had it),and went on to co-found
ATARI, the video game company, went on to found...